Then I saw a new heaven and a new earth; for the first heaven and the first earth had passed away, and the sea was no more. And I saw the holy city, the new Jerusalem, coming down out of heaven from God, prepared as a bride adorned for her husband. And I heard a loud voice from the throne saying,
‘See, the home of God is among mortals.
He will dwell with them;
they will be his peoples,
and God himself will be with them;
he will wipe every tear from their eyes.
Death will be no more;
mourning and crying and pain will be no more,
for the first things have passed away.’

And the one who was seated on the throne said, ‘See, I am making all things new.’ Also he said, ‘Write this, for these words are trustworthy and true.’ Then he said to me, ‘It is done! I am the Alpha and the Omega, the beginning and the end. To the thirsty I will give water as a gift from the spring of the water of life.

I am quite strongly tempted to just leave off speaking before I begin. Who could possibly top that vision of future fulfilment? Beautiful, powerful poetry, an astonishing promise.

But what does it all mean?  What does this mysterious passage from an even more famously mysterious book have to do with us? Surely, in a world come of age, we’re a bit beyond all this sort of thing? In a world that places so much emphasis on knowing for oneself, what on earth does this antique document have to teach us? Surely it is better if we just quietly ignore it and move on?

Here’s a question for you: who are the important people in your life who communicated the faith to you? Who are a couple of people whose responsibility, under God, it is that you are here?

For me, it’s primarily my parents. My mother, with her passion and fire for the gospel and for the transformed world she longs to see. My father, with his steadiness and quiet enduring faith. Anne with her deep, rich, authentic spirituality. Then a variety of other people – school and university friends. My old minister from our last few years in London. Steve, the guy who founded Cafechurch. The Cafechurch community itself, such a profound place of spiritual holding during some very difficult years in my life.

That’s the thing about faith. It isn’t a private possession, something I discover for myself. It is not “the alone into the alone” like the neo-platonists thought of it, and nor is it “what the individual does with his own solitariness.” Instead it is much more like being adopted into a family, or learning the composition from someone who learned it from someone else who, at the end of the chain, learned it from Mozart.

The observant amongst you might have noticed the three icons in the minister’s office. C.S. Lewis, Ignatius of Loyola, and Columba of Iona. Each one of them is significant in their own way to my journey, but the most relevant today is Columba. As I’m sure I have mentioned before, Anne and I met in Iona, at the abbey that Columba founded in the sixth century. Coincidentally, my parents met in St Columbs church in Sydney. But beyond that, my father’s family have Scottish, French, and Irish antecedents. It’s probable, then, that I learned my faith from one who learned the faith from someone who… at the beginning of the chain that links me to the sixth century, learned it at the feet of Columba. Who, in turn, links me to the lineage from St Patrick, and then all the way back to the apostles, and to Jesus himself.

It’s much more like being part of some sort of vast intergenerational family saga, or an adventure story of some sort, than it is like independently discovering the second law of thermodynamics or something.

This is all very interesting, but how does it get us any closer to making sense of Revelations?

This isn’t the time for a lengthy discussion of it, but it’s important to understand what sort of thing apocalyptic literature is. It isn’t necessarily supposed to be a prediction of the future – it isn’t a sort of highly coloured version of an ancient economist attempting to predict economic cycles, though in a way it is even more grounded in reality.

Apocalyptic literature is more like comedy. Not in that it’s funny, but because it uses a particular set of conventions and settings to try to convey a deeper truth. Or sci-fi, which very often takes a particular social trend, or philosophical question and extends it into the future. For instance, Blade Runner was, at one level, an exciting science fiction noir detective film. But, at a deeper level, it asked: what is consciousness?

Apocalyptic literature is like that. It’s a way of getting beyond “what’s happening” and getting to “what’s really going on.” 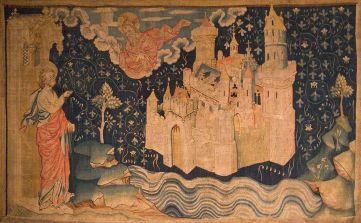 So what is going on here, with all this talk of cities in vertical motion that are simultaneously wearing a wedding veil? And who is the figure “on the throne”?

The new Jerusalem is the renewed Jerusalem, the one in which God is fully present. The experience of the Israelites with the return to the actual existing Jerusalem after exile was that the exile hadn’t really ended. Corrupt rulers, foreign domination, people using the temple to rip off the poor – it all pointed to still being in exile. And, of course, by the time Revelation was written, perhaps around 96 AD at the end of the reign of Emperor Domitian, the temple had been destroyed and Jerusalem razed to the ground.

So it stands as a fulfilment of God’s promise.

For us, for whom the Temple in Jerusalem is not central to our way of seeing the world – what does it mean? Last week we talked about “fullness”

We all see our lives… as having a certain moral/spiritual shape.  Somewhere… lies a fullness, a richness; that is, in that place…, life is fuller, richer, deeper, more worthwhile, more what it should be. Perhaps this sense of fullness is something we just catch glimpses of from afar off…. But sometimes there will be moments of experienced fullness, of joy, and fulfilment.[1]

In Revelation, this fullness is given a definite shape. It is a place, and that place is where God will be with us.

The second question is: who is the figure on the throne? We immediately say: Jesus. But one of the good things about Revelation is that it makes the figure strange – it shows who Jesus really is. Jesus is not just some wandering wisdom teacher, nor just an exorcist and faith healer from a culture that seems unfathomably remote from our own.  Jesus isn’t even just a human figure, however exalted. Jesus here is somehow identified with fullness, with God’s presence, and with the fulfilment of all things. 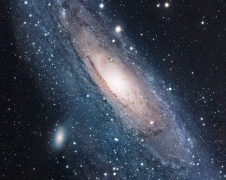 Let’s just think for a moment what a surprising claim that is. The universe, with its whirling stars and completely unfathomable size and age. This earth, spinning out of the sun, cooling, life evolving in fits and starts over long ages – tens, hundreds, thousands of million years. Then humanity – all our wars and religions and philosophies. Tribes, cities, nations, empires, all rising and falling.

And Christianity has the, well let’s say surprising confidence to identify that which lies behind all this mind-bending activity with something more like a human than anything else we know. Not merely human, not like the quarrelling gods of the Greeks. But more like a person than like a natural force. A person with intentions, and a person, most surprisingly of all, who loves us.

The one who made the stars, against all plausibility, loves us – individually and particularly, and enough to do something about it in somehow, in modes which we aren’t capable of comprehending, has come to us in the figure of the one “seated on the throne” in unfathomable majesty – who is somehow, simultaneously a figure trudging down a dusty road, leading his squabbling friends on a journey they don’t understand, to visit his friends, one of whom has just died.

Standing at the tomb of his friend, and weeping.

The whole universe, concentrated on this one human man, and on what he is going to do. And, more importantly, what God is about to do through, and with, him as he completes his journey to Jerusalem.

It’s a big claim. And what on earth does it have to do with all saints day?

It’s a question of justification. Not in the religious sense, but in the epistemological sense. What possible evidence do we have that Jesus is in any sense to be spoken of in the same breath as God?

The answer is: the resurrection.

This is the core of our faith. Jesus died, punished by the state and religious authorities for reasons of state. And if that was the end of it, then that was the end of the movement. Messianic figures came and went in occupied Israel. If they died, then their followers decided that they couldn’t have been the messiah after all.

And for all that long dreadful Friday, and the dead Saturday afterwards, that is what the disciples – our spiritual ancestors – thought had happened. That it was all over.

The whole Christian movement shrinks down now. To the women disciples. Not someone who the ancient world was disposed to give a lot of credit to. But they go to the tomb, Mary Magdalene and some of the others, and they come back bearing the astonishing news that Jesus is not there. That something has happened. Something that is still reverberating through the world today. Something that brings us to worship together in suburban Glen Iris on the Sunday before Melbourne Cup when half the city has gone away for the long weekend.

We come together to share the good news with one another.

The church is precisely that community who carry that news, and tell it to each other, and to those outside. The church, in all its good and bad aspects, is the evidence for the resurrection, and for all the astonishing claims that Christianity makes about Jesus and God and God’s love for the world, in spite of how things look sometimes. Our ancestors were witnesses to it. We don’t believe it because it’s in the Scripture. We believe Scripture because it is the book of the church, and because it points to Jesus. Because of the trustworthiness of the testimony of those who bear witness to the truth of the resurrection. That is, not only through what they say, but by the way they live their lives make it seem possible that God really does love us, and really has intervened in history. We are witnesses to the resurrection, in an unbroken chain going back to that first Easter Sunday morning.

Jesus said to Mary: “Did I not tell you that if you believed, you would see the glory of God?”

There really is “one seated on the throne” who is alpha and omega, and who is ultimately worthy of our trust, exercised both through our lives, and through our death, to our resurrection into God’s fulfilment of all things – our Jerusalem, our own, our native land, where God wipes away every tear, and the sea is no more.

A sermon preached at Glen Iris Road UCA on 4/11/18 where we were a little late to the party around All Saints Day. Here’s a link to the texts, for the keenies.