I’ve been reading about Effectuation recently. It’s a way of reasoning characteristic of entrepreneurs, discovered by academic Saras Sarasvathy’s research into how a number of successful entrepreneurs got where they were. You can read about her research here.

The  top level way to understand this is to distinguish effectual reasoning from what she terms “causal reasoning”. We might think of it as being a more traditional, managerial way of thinking where you know what your goal is, and you come up with a number of steps which will move you incrementally closer to your goal. You are, for instance, launching a new range of breakfast oats onto the market, and so you develop, say, manufacturing and marketing plans. It’s a reasonably well understood market, so, as a manager, you can be reasonably confident that the plan you come up with will succeed.

Effectual reasoning, on the other hand, is different. You don’t know the goals, you don’t fully understand the market, and so you can’t come up with a sensible three year plan to show investors. Like the complementary idea of  Lean Startup  it’s a way of operating in highly uncertain territory.

Sarasvathy describes five elements which go into making up effectual thinking (see the Effectuation website). They are:

These are drawn together in the Effectuation process. 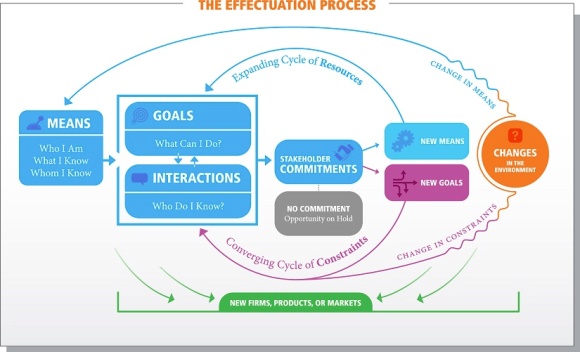 I think this is a really useful approach to starting new ventures of all sorts – and this includes Christian, Kingdom-building ones as much as “secular” ones. But there is a problem with naively appropriating business techniques to spiritual uses. Every technology, and every technique, has a worldview build into it, and Effectuation is no different.

There is, it seems to me, a basic issue with effectuation (and other techniques like it). There is no inbuilt tendency to good (in the sense of moral) outcomes built into the idea. You might use effectual logic and come up with a way of reducing infant mortality by 10% in sub-Saharan Africa. Or you could come up with a really innovative and cost-effective way of manufacturing napalm. Either way would be an equally valid use of effectual reasoning. It all depends on what counts as “success” for you.

There is a second, underlying, issue here. The primary thing that the entrepreneur has – their primary means – is “Who I Am.” The basic idea of effectuation is that you are a certain sort of person, with a certain set of skills, and  with a certain network. But of course, whom you know, and what you know are both driven by who you are. You could learn more stuff, and you could meet new people.

But who are you?  To put it another way, what do you want? It isn’t obvious. As Abraham Maslow put it: It isn’t normal to know what we want. It is a rare and difficult psychological achievement.

Let me introduce another idea into this. Let’s call it the “Apostolic Imagination.” God has gifted you with a certain sort of personality, and a unique way in which you can collaborate in God’s redemptive work in the world, of building the Kingdom. You dream of doing great things for God – what the Ignatian world calls the “magis” – “the more.” Chris Lowney, former Jesuit and writer of Heroic Leadership, (a great book about Jesuit practices for business leaders that I strongly recommend) describes it this way.

Jesuits were also driven by a restless less energy, encapsulated in a simple company motto, magis, always something more, something greater. For Jesuit explorers all over the world, magis inspired them to make the first European forays into Tibet, to the headwaters of the Blue Nile, and to the upper reaches of the Mississippi River. For Jesuit teachers in hundreds of colleges, magis focused them on providing what was consistently the world’s highest-quality secondary education available-one student at a time, one day at a time.

This idea is at the heart of what I want to say. You want to do great things for God – things that have not yet been done. This is Apostolic Imagination.

But it doesn’t seem to move us very far forward. You already knew you want to achieve great things for God – that’s why you’ve persevered so far.  But we haven’t finished with the Ignatian world yet. One of the core things – perhaps the core thing about Ignatian Spirituality is getting to grips with your real, basic desire for, and choice for, God. It is a key part of the Spiritual Exercises, and it is the key idea of the practice of the Examen. Ignatius told his followers that, even if they were too busy, or too far away in the headwaters of the Blue Nile, to do anything else, they should perform the Examen twice every day.

The Examen comes in a lot of flavours, but fundamentally it asks 5 questions:

The idea is to get closer in touch with who you really are, and what your real desire for God actually looks like. Not what you think you ought to do, and definitely not what your boss / teacher /  mother / church thinks you should want. But your actual, personal calling. It brings you back to your true desire for God, and roots it in what you have actually done during the past day.

This seems to me to be a solution to the problem with all entrepreneurial activities from a church perspective: how can you guarantee in advance that what you are doing really will advance the Kingdom? Of course, you can’t guarantee it. But, you know, doing church exactly like your denomination has always done it is no guarantee of it either. You can have exquisite liturgy that involves absolutely no Christlikeness. It is a matter of the heart, of your fundamental orientation towards Christ. Likewise with effectuation – it works on the “who I am” level (or, rather, “who am I becoming”.) If your heart is heading the right way, then the authentic expression of your apostolic imagination will come along for the ride.

The junction between the Examen and effectuation is around prayerfully clarifying your desires, with all their brokenness, in the light of your fundamental desire for God, and your response to God’s love of you. It’s part of a broader process of bringing your desires into right order, and your external life (which is often referred to as your ego, or false self) into alignment with your inner life  (your true self, your soul.) The extent to which you bring your desires into conformity with God’s desires is the extent to which you are participating in God’s mission in the world.

As Augustine of Hippo said: Love and do what you will.